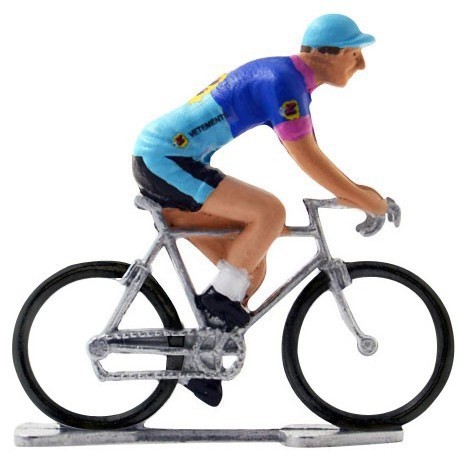 Z was a French professional cycling team that was founded in 1987 with Roger Legeay and Serge Beucherie as team leaders. The team existed until 1992. Z is a brand of children's clothing and belongs to the Zannier group.

In 1987, Z became a sponsor of the famous Peugeot team. The new team name was Z-Peugeot. At the end of 1989, Peugeot withdrew from professional cycling and the team got the name Z. After Z stopped to be a sponsor, the team was renamed Gan in 1993, and Crédit Agricole in 1998.

Z had a peak in 1990, when it engaged Greg LeMond, winner of the Tour de France 1989. Greg LeMond won the Tour de France for Team Z in 1990, winning the yellow jersey in the last time trial (just like in 1989). Teammate Ronan Pensec was part of a breakaway in that Tour, together with 3 other riders: Steve Bauer, Frans Maassen and Claudio Chiappucci. They took a 10 minute lead on the bunch.

Thierry Claveyrolat
Thierry Claveyrolat was a French cyclist. He rode for the Z team from 1991 to 1992. In 1983 he became a pro, and was a pro cyclist until 1994. In addition to the Z team, he also rode for the U.C. Pélussin, Système U, La Redoute, R.M.O. and GAN teams. He won in the Dauphiné Libéré and Midi Libre. But his biggest achievement in cycling was winning the polka dot jersey in the Tour de France of 1990. Claveyrolat was a gifted climber. Because he was slim and small, he got the nickname Clavette. His weakness in the big tours was time trial, which made it difficult to win the general classification in a big tour. Claveyrolat died in 1999. He decided to step out of life himself. There is a memorial for him at the Chemin de la Bastille in Grenoble.