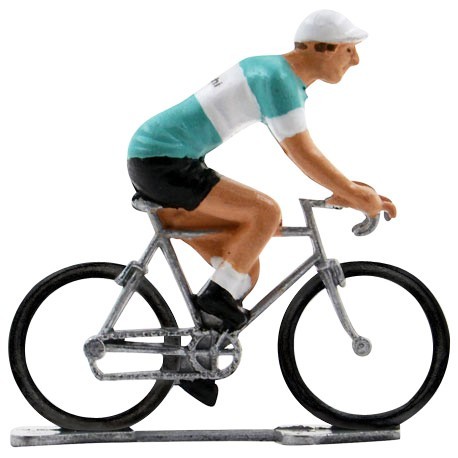 Bianchi is an Italian brand of bicycles, motorcycles and cars. The story began in 1885, when 20-year-old Edoardo Bianchi made his first bicycle in a very small studio in Milan. It became a huge success. Three years later Bianchi had to move to a larger building. He was the first Italian manufacturer to supply the bicycles with rubber tyres. The cycling team was founded in 1899, making it one of the oldest cycling teams in the world. Bianchi has become a big name in the world of cycling.

The Bianchi team has not been continuously present in the peloton. The team was active in the years 1899-1900, 1905-1966, 1973-1989 (with the famous sports director Giancarlo Ferretti), 1993 and 2003. Bianchi was sometimes main sponsor and sometimes co-sponsor, and also supplier of bicycles and parts.

The Bianchi bikes are known because of the specific color: celeste. Originally it was sky blue, but today it's a kind of sea green.
In the years before 1940 Bianchi achieved many successes in the sport, thanks to the rider Tazio Nuvolari among others. Other successful riders were the Italians Fausto Coppi and Felice Gimondi. They had great successes on a Bianchi bike. The sprinter Mario Cipollini (super Mario), Moreno Argentin and climber Marco Pantani also rode a Bianchi.

In 2003 Team Bianchi was reborn. Team Coast was suspended due to financial problems. Cycling producer Bianchi took responsibility for the team that would race with a German license. The team leader was Rudy Pevenage, and the manager was Jacques Hanegraaf. The best known rider in the team was Jan Ullrich, an excellent cyclist for time trial and climbing. Tobias Steinhauser was also part of the team. At the end of the season Bianchi retired as main sponsor, but in 2004 he became co-sponsor of the team Alessio-Bianchi.

In 2005, Bianchi again chose for the co-sponsorship, together with Liquigas. This sponsorship also lasted only 1 year. After that Bianchi worked together with the Norwegian Team Maxbo.