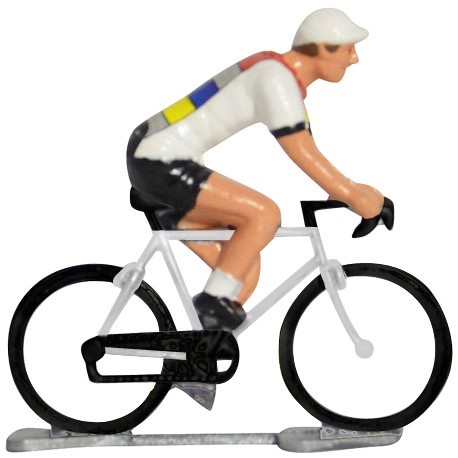 The La Vie Claire team was started in 1984. The founder was Bernard Tapie and the manager was Paul Köechli. The team consisted of the four-time winner of the Tour Bernard Hinault, Greg LeMond, Andrew Hampsten and Steve Bauer. Hinault’s Tour victory in 1985 and the LeMond victory in 1986, and on top of that winning the team classification, La Vie Claire had his place in the peloton.

1984: the start of a new team
The team was started up after there was a dispute between Bernard Hinault and his sports director Cyrille Guimard at Renault-Elf-Gitane. Hinault had won the Tour de France 4 times. But after these success years Hinault's team colleage Laurent Fignon was the winner of the Tour in 1983. And at that time Hinault got injured. As a result Fignon was the new leading cyclist in the team. This was the reason of the conflict. Hinault then started the La Vie Claire team together with businessman Bernard Tapie and the Swiss Paul Köchli. Tapie saw things big by investing millions. This would cause a revolution that would change the small world of cycling forever. Tapie doesn't have to search to find sponsors: he uses his own companies. La Vie claire (an organic food chain) will give his name to the team. But also the names of Terraillon, Wonder and Look will appear on the sweater. The design of the sweaters were inspired by the work of Piet Mondriaan.

In the 1984 Tour, Renault-Elf-Gitane was the strongest team and won eight stages. One of these stages was the prestegious team time trial. The team wore the yellow jersey from the fifth stage until the end of the Tour (Vincent Barteau and Laurent Fignon). Fignon was the winner of the GC with more than ten minutes ahead of Hinault. With youngster and world champion Greg LeMond, Renault also finished third in the general classification. They also won the youth classification with Lemond.

1985: the team becomes the strongest
After the dominance of the Renault-Elf-Gitane team, the La vie Claire team would change cycling forever. After the Tour de France of 1984, Bernard Tapie offered Greg LeMond a contract he couldn't refuse. LeMond accepted the 1.000.000 dollar contract. From that time all teams had to increase the the salaries of professional cyclists in order to engage the best riders. Tapie would have approached Fignon as well, but he stayed with Renault. Niki Rüttimann, Kim Andersen and Steve Bauer were also engaged. In 1985 Hinault won his 5th Tour de France and his 3rd Tour of Italy, supported Greg LeMond who was not allowed to attack his leader. In 1986 Hinault had promised LeMond to help him win the Tour in return. But the Breton didn't make it easy for the American. In the end LeMond won his first Tour. Hinault finished second and Hampsten fourth.

1987: the end of Hinault and Lemond, the team is now called Toshiba-La vie Claire.
Hinault stopped and Lemond had very bad luck in the spring of 1987. He got injured in an accident during hunting. The new leader of the team with the new name Toshiba-La Vie claire became Jean-François Bernard. He was leader in the GV during the Tour in 1987, and finished in third place. It is the Irishman Stephen Roche who will win the Tour that year. Hampsten won the youth classification. He left the team at the end of 1987 for 7-eleven.

1988: La vie Claire disappears from the jerseys, Toshiba-Look is the new name
LeMond and Bauer leave the team and Tapie and Koechli stop leading the team (1988 and 1989). Luc Leblanc and Bjarne Riis join the team. In the last years, the Swiss Tony Rominger and the Frenchman Laurent Jalabert were the new leaders. The team withdrew from the peloton at the end of 1991.