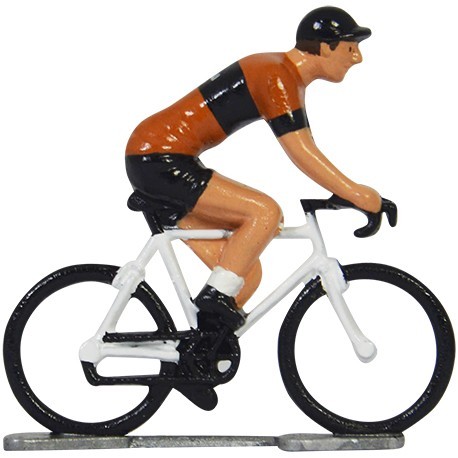 Spectacle in the Tour
In the stage to Orcières Merlette Luis Ocaña managed to take a lead of more than 8 minutes on Merckx. A few days later Eddy Merckx would attack. In the stage to Marseille (251 km) the race was fast from the start. Shortly after the start a group of riders attacked with the Molteni teammate Wagtmans in the descent. To Ocana who started at the back of the peloton, the surprise was complete. This resulted in a leading group of 9 riders with Merckx and his teammates Wagtmans, Huysmans and Stevens. The other members of the Molteni team did a great job in the peloton. The whole stage is very fast with a difference between the leading group and the peloton that fluctuated between 1 and 2 minutes. The average speed was above 45km/hour. Upon arrival in Marseille the leading group has a lead of more than two hours on the fastest schedule. Armani won the stage and Merckx takes 2 minutes back on Ocaña. Ocaña remains the leader in the general classification, but two stages later he fell in the descent of the Col de Mente during heavy storms. Ocana would have to leave the Tour. Merckx wins the Tour that year, and the Dutchman Wagtmans ends up 16th in the general classification.

Merckx and his teammates
The presence of Merckx was not appreciated by everyone. The star Marino Basso (Italy) did not have an optimal relationship with Merckx. In 1972 he joined the Salvarani team of Felice Gimondi, a big competitor of Merckx. There was also a break with sports director Lomme Driessens, the man who was also his sports director at Faema. Driessens had coached many great cyclists during his career, such as Fausto Coppi and Rik van Looy. But after having worked with Merckx at Faema and Molteni for a couple of years, the cooperation stopped. There was a new team management: Bob Lelangue and Giorgio Albani. The Italian Albani had already been a sports director in the 60's, and had been a rider himself. His nickname was Il Professore. He had a lot of tactical knowledge of cycling, and was a diplomat. Belgian Lelangue used to be a teammate of Merckx at Faema. The team became more and more a team with Belgian riders and employees. In 1972 Merckx won a lot of races. He won Milan-San Remo and Liège-Bastogne-Liege and in Mexico he became holder of the World Endurance Record. In 1973 he won in a heroic way Paris-Roubaix. At sixty kilometers from the finish he rides away from Roger de Vlaeminck. Liège-Bastogne-Liège was also for Merckx. That year he doesn't ride the Tour de France, but he does ride the Vuelta in which he is better then Ocaña. He also wins the Giro with more than 7 minutes on his rival Gimondi. Yet there comes an end to that fantastic season full of successes. In the Tour of Lombardy he is disqualified after a positive doping control. He had used a syrup that was prescribed by the team doctor Angelo Cavalli.

The years of success continue
In 1974 the season started well for Molteni. Joseph Bruyère won the Flemish opening classic Omloop het Volk. However, Merckx could not win any of the other classics. But in the big tours Merckx was back. He managed to win the Giro for the 5th time although it was a seconds game. The difference with the second one, Baronchelli, was only twelve seconds. And yes, he also wins the Tour de France for the 5th time. Merckx thus equalled the record of Anquetil. Also the end of the season was one in style. He became world champion again, this time in Montreal. With one of the servants of Merckx there are discussions. Roger Swerts wants a different role in the team and also demands more money. But Merckx doesn't agree. Everyone gets the same salary and that's how it's going to stay. Swerts leaves Molteni at the age of 32, and becomes the leader of Ijsboerke, the team of Rik van Looy. But this turned out not to be a success, and Swerts was happy when he was allowed to return to Molteni 2 seasons later. In 1975 the cannibal wins Milan-San Remo, Liège-Bastogne-Liège and the Tour of Flanders again. After that he almost wins Paris-Roubaix. Roger de Vlaeminck wins the cobblestone classic because Merckx has a flat tyre 8 kilometers before the finish. In the Tour de France a spectator gives him a blow on his head during the climb of the Puy de Dôme. The next stage he has a hard time on the Pra Loup. There he loses the Tour and becomes 2nd in the general classification, after Bernard Thevenet. In 1975 he rode 180 races and tours. This inhumane amount of races was even too much for the cannibal from Tervuren. It would be the beginning of the end for the great champion.

The last years of Merckx
The following season was a lot less for Merckx. Yet he could still win Milan-San Remo. It was teammate Bruyère who won Liège-Bastogne-Liège. Also in the big tours he couldn't get a final win. He was only eighth in the Tour of Italy which was won by Felice Gimondi. An injury made him suffer. In the Tour of France he could not participate on doctor's advice. And the Super Prestige Pernod, which he had won seven times in a row since 1968, he could not win that year. It was his compatriot Freddy Maertens who crossed the line first. The Dutchman Cees Bal achieved a number of nice places of honour for Molteni. But once again it turned out that Eddy Merckx cannot be replaced. The sponsor Molteni gets it more difficult financially and withdraws from cycling. The years before, the sausage manufacturer had already brought co-sponsors such as Campagnolo into the team. Eddy Merckx went with his servants to the Fiat team. But he couldn't match the top years he had had at Molteni. The following season would be his last as a cyclist with the C&A team. In 1978, when he was 33 years old, he stopped with professional cycling. After that Merckx started a bicycle factory. Many of his old servants, and Robert Lelangue he offered a job.