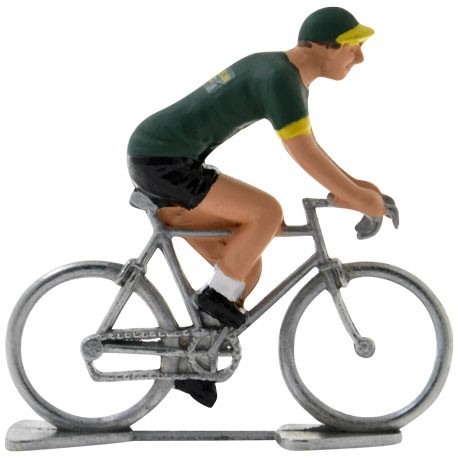 Groene Leeuw is a Belgian cycling team from the post-war period. From 1945 until the end of the 60's the team was active in the cycling peloton. We write 1945. A new Belgian team is started. Groene Leeuw, sponsored by bicycle manufacturer Groene Leeuw is born. Groene Leeuw made men's bicycles, women's bicycles and racing bicycles. So the step to cycling was not a big one. The founder and owner of the company was Adolphe De Kimpe. Some time later, his son Albert also comes to help in the business. Albert was also known as Berten De Kimpe.

The team had a lot of co-sponsors. The most famous co-sponsor of Groene Leeuw was Wielemans-Ceuppens. This Belgian beer brewer promoted his brand Wiel's through cycling.

The World cyclo-cross title by Eric De Vlaeminck was the very first Belgian world title in the field.

The biggest success in an important stage tour was undoubtedly the final victory in 1960 in the Vuelta by Frans De Mulder. The 2nd in the general classification was also a teammate, namely Armand Desmet. Frans De Mulder won 4 stages. Another teammate, Arthur Decabooter won 2 stages and also won the points classification. He was allowed to take the blue jersey home. Decabooter also finished in the top 10. The team had 3 riders in the top 10 of the Vuelta of 1960. The success was complete. Groene Leeuw also won numerous stages in the Tour de France, but could not get a final victory.

In 1969, Groene Leeuw withdrew from cycling as a sponsor.