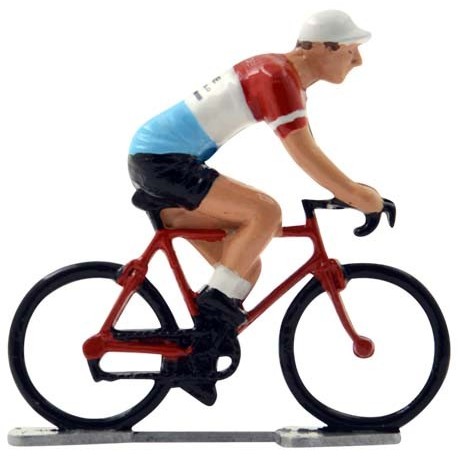 The team was founded in 1954. It is sponsored by the aperitif brand Saint-Raphaël. Over the years, co-sponsors Géminiani cycli, Gitane, Dunlop, Helyett and Hutchinson also joined the team.

The team has won the three big tours, including the Tour de France three times in a row. The most important leaders were: Jacques Anquetil, Jean Stablinski, Rudi Altig, Raphaël Geminiani, Roger Rivière and Roger Walkowiak.

Already in his first professional year the 19-year-old Norman won the Nations Time Trial GP for the legendary Fausto Coppi. In his career, Anquetil won the most important race against the clock nine times (1953-1958, 1961, 1965, 1966). In 1956, Anquetil beat Fausto Coppi's 14-year world hour record to more than 46 kilometres.

In 1957 Anquetil started in the Tour de France for the first time and immediately won the most important stage race in the world with an impressive lead of almost 15 minutes. He won four stages. The key to his success was also his very good time trials. That is why people gave him the nickname "Monsieur Chrono". But also in the mountains Anquetil could follow the best climbers.

After three mediocre years without Tour success, Anquetil returned in 1961 with his second overall victory. He won the Tour de France four times in a row until 1964 and was also the first to achieve a total of five successes. In this period Anquetil won all time trials, except one. In 1963 he was named Sportsman of the Year by the sports newspaper L'Équipe.

His last tour victory in 1964 was also his most well-known victory. His elbow duel with the public favourite Raymond Poulidor in the Puy de Dôme is part of the French sports history. Because he cleverly concealed his exhaustion on the mountain from his competitor, Poulidor attacked too late. In Paris, Jacques Anquetil is 55 seconds ahead of the "eternal second" Poulidor.

Anquetil was the first of only six riders to win all three Grand Tours. In addition to his five tour victories (like Eddy Merckx, Bernard Hinault and Miguel Indurain), he won twice the Giro d'Italia (1960, 1964) and once the Vuelta a España (1963).

Anquetil was not very successful in the classic one-day races. At the end of his career he did win the classics Liege-Bastogne-Liege (1966), Bordeaux-Paris (1965) and Ghent-Wevelgem (1964). At the 1966 World Road Championship he finished second behind Rudi Altig. But rumour says that out of vanity he didn't show up at the prize ceremony.

He confessed that in 1966 and 1967 he tried to improve his performance by taking amphetamines, caffeine and cortisone. Subsequently, the 1967 world time record he set was not recognized by the International Cycling Union (UCI).

At the age of 36 he finished his cycling career in 1970. Despite his great successes, which made him one of the biggest riders ever, the cool "Maître Jacques" was never as popular as his French compatriot and rival Poulidor.