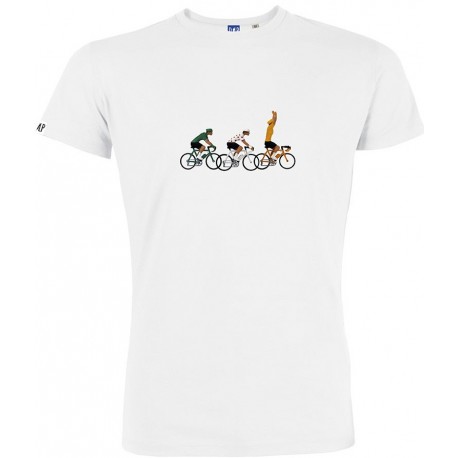 T-shirt Yellow jersey
The yellow jersey is the shirt in which the leader of the general classification of the Tour de France rides.

Henri Desgrange is the founder of the Tour de France. He always tried to make the race more attractive. At the same time, he wanted to generate more turnover for his newspaper l'Auto. An example to make the race more interesting was the introduction of a leader's jersey. This made it possible to recognise the leader of the general classification. The first yellow jersey was awarded during the Tour of 1919. The first one to wear the yellow jersey was Eugène Christophe. The first winner, who was allowed to put on the jersey in Paris, was Firmin Lambot. The yellow was chosen because l'Auto, the organizing newspaper, was printed on yellow paper. Getting a yellow jersey is a great honour for many riders, even if the General classification is not won.

The climbs where points can be earned for the mountain classification are divided into 5 categories: Outside category (e.g. Alpe d'Huez or Mont Ventoux), first category, second category, third category and fourth category.