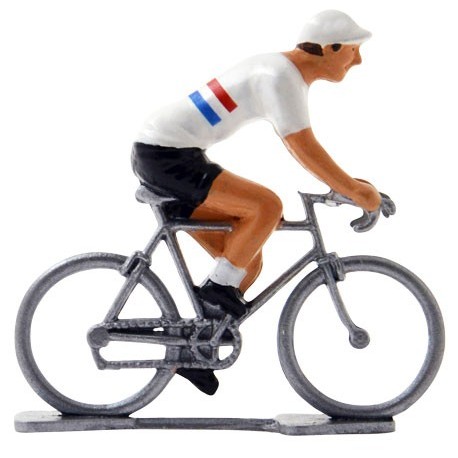 In Great Britain, every year the professional riders compete for the national title in cycling. The rider who wins the race can call himself the champion of Great Britain for one year. That rider may wear the white jersey with red-white-blue horizontal stripes for 1 year. There are races for men, women, amateurs, juniors, ... and there are also several disciplines such as the road race and the time trial.

Bradley Wiggins
Sir Bradley Wiggins is a former British professional track and road cyclist who joined the peloton between 2001 and 2016. Nicknamed "Wiggo", he started his cycling career on the track, but made the switch to road cycling and is one of the few cyclists in modern times who has achieved real success in both forms of professional cycling. He is still the only rider who has won both the World and Olympic Championships on the track and on the road. He also won the Tour de France and once owned the world hour record. In addition, he has worn the leader's jersey in each of the 3 Grand Tours. He set the world record in the team pursuit several times.

Wiggins is the son of an Australian cyclist and a British mother. He was born in Ghent (Belgium). His father lived in Belgium as a professional cyclist but left the family when Wiggins was 2 years old. Wiggins then moved with his mother to London where he grew up.

Football was his first passion and he was a fan of Arsenal. He discovered cycling when his mother told him to watch the television broadcast of the individual pursuit final of the 1992 Olympics in Barcelona, which was won by the British Chris Boardman. She explained that it was in this kind of race where his father had been successful. He watched the rest of the Olympics and fell in love with cycling and the Olympics.

He started as a track cyclist and would stay with his first love until 2008. He won 6 gold medals at the World Championship. At the Olympic Games he won gold in Athens 2004, and in Beijing 2008.

On the road Wiggins started his professional career in 2001. Initially he was seen as a time trial specialist, but he soon showed that he could also finish high in stage races. He finished fourth in the 2009 Tour de France. In 2010 he joined the newly created Team Sky and in 2011 he won his first big stage race in the Critérium du Dauphiné. He finished third in the Vuelta a España. In 2012, Wiggins won Paris-Nice, the Tour of Romandie, the Critérium du Dauphiné and became the first British rider to win the Tour de France and the time trial at the Olympics.

In 2014, he won gold in the time trial at the World Road Championships and founded the Wiggins cycling team. Wiggins returned to the track at the 2014 Commonwealth Games and in June 2015 set a new hourly record with a distance of 54,526km. In 2016, again he won gold on the track in the World Championship. And at the Olympics he won gold again and this was his fifth consecutive medal at the Games. In 2016 he withdrew from all forms of professional cycling.

Discover all our miniature cyclist figurines.