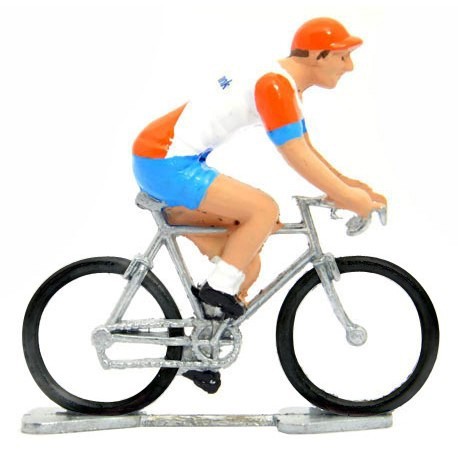 The Rabobank professional cycling team was founded in 1996. This Dutch team was the successor of the Novell team. The team was started as part of the "Rabobank Cycling Plan". In this plan not only the professional team was involved, but also the development of new talents was importan. Rabobank invested 10 million gulden, 70% went to the professional team. It was ex-rider Jan Raes who founded the team and became its sports director. He was looking for another major sponsor when his team got into financial problems in 1995. The team leaders of the new team were Theo de Rooij and his assistants Adri van Houwelingen and also Joop Zoetemelk. Jan Raes took a number of Novell riders with him such as the Belgian Edwig van Hooydonck, Vjatseslav Jekimov and also the young riders Erik Dekker, Léon van Bon and Michael Boogerd. Also from other teams good riders came to Rabobank. Among them are Rolf Sörensen, Erik Breukink, Johan Bruyneel, Koos Moerenhout and Robbie McEwen. Frans Maassen was the trainer of the junior team.

The successes came almost immediately. Two victories followed in the Amstel Gold Race in 1999 and 2001 (Michael Boogerd and Erik Dekker). For the Dutch sponsor it was very important to make extra publicity in the homeland. The Clásica San Sebastián was also won (Erik Dekker) in 2000. Marc Wauters triumphed in Paris-Tours in 1999. In 1997 Rolf Sørensen won the Tour of Flanders, and Michael Boogerd won the general classification in Paris-Nice in 1999.

The Rabo Wielerplan was extended several times in between. The goals were achieved and the sponsor was satisfied with that. Therefore they decided to continue. The sponsor set higher goals, and in 2001 the goal was to win the Tour de France. The American Levi Leipheimer, specialist for stage tours, was recruited. He was hoping for the yellow jersey. But the positive results from the past could not be achieved. In 2003 the team got into a negative spiral and could hardly win races. Also in the tour of France it didn't go very well. The cooperation with Jan Raes was stopped. In 2004, Theo de Rooij became the new team director and former rider Erik Breukink became team director. As of 2007, the sponsorship contract was extended a couple of times.

In 2007 the Dane Michael Rasmussen finished a fantastic Tour de France. He wore the yellow leader's jersey for nine days. But he was caught on doping and was expelled from the Tour de France. He was also fired by his employer. Theo de Rooij stopped at the end of the Tour. His successor was Henri van der Aat. In 2008 Harold Knebel became general manager of the Rabobank Cycling Teams. Erik Breukink became sport director of the team in 2010. The team management consisted of Nico Verhoeven, Adri van Houwelingen, Erik Dekker, Frans Maassen and Jan Boven.

But top performances were also achieved in the classics. Milan-San Remo was won 3 times by Óscar Freire: 2004, 2007 and 2010. The Omloop Het Nieuwsblad was won by Sebastian Langeveld in 2011. And in 2004 Óscar Freire became world champion on the road.

Despite the successes, the team regularly got negative publicity. The doping suspicions were never far away.
In 2012, Rabobank decided to stop the sponsorship. Rabobank did not want to be associated with the many doping cases that Rabobank and cycling in general had to deal with.
The team was looking for a new sponsor. The team first continued as White Label team Blanco Pro Cycling Team. In 2013 they found a new sponsor in Belkin, the American manufacturer of computer hardware. A year later, Belkin stepped back from cycling. Again, a new sponsor had to be found. The team was baptized Team LottoNL-Jumbo, and then Team Jumbo-Visma.