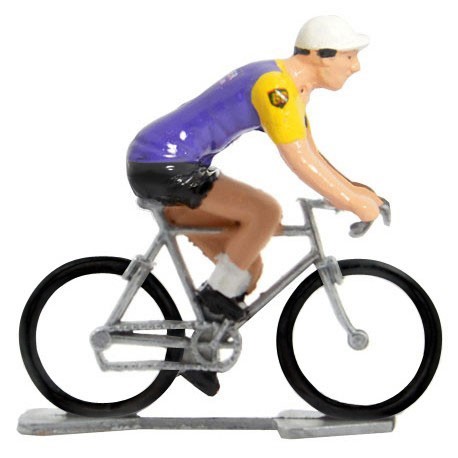 Mercier is a French cycling team that joined the peloton from 1935 to 1983. The team always rode with Mercier racing bikes.

Bicycle manufacturer Cycles Mercier was the main sponsor of the team from 1935 to 1969.

Since 1946 the team rode with purple jerseys. In 1950 the jersey was adapted with a yellow band in the neck. The jersey would stay that way until 1969, when Mercier continued as co-sponsor.

Hutchinson was the co-sponsor from 1935 to 1955. The team had the name Mercier-Hutchinson. BP joined the team from 1956 to 1969, and so the name of the team was Mercier-BP-Hutchinson. Antonin Magne, who had won the Tour de France twice and the World Championship once in 1936, ended his career as a professional rider in 1941. In 1953 he joined the team as sports director. He held this position until 1970. The team then continued as Fagor-Mercier.

Under Magne the team had a lot of successes. In 1955 he won the Tour of Flanders with Louison Bobet and later that year also the Tour de France.

When Bobet left the team, Raymond Poulidor joined the team. He would compete with the other Frenchman Jacques Anquetil in the Tour. In 1964 Poulidor won some nice races including the Tour of Spain and Milan-San Remo. After the final victory in the Tour of Spain he competed with Anquetil in the Tour de France of 1964. Poulidor finished 2nd in the general classification, only 55 seconds behind winner Anquetil. Poulidor had not won the Tour de France, but he was supported by the fans. This made him much more popular than Anquetil. Poulidor rode his entire professional career at Mercier.