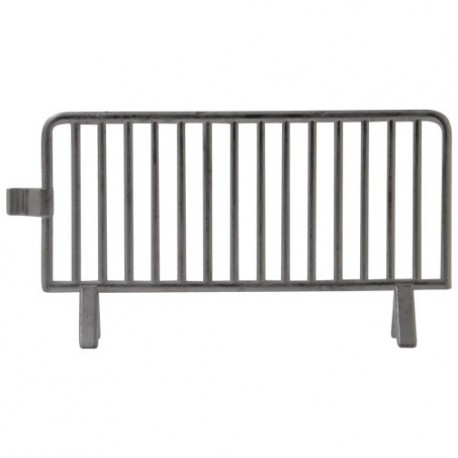 Nadar fence in the same scale of our cyclists. These fences complete your setting. Our nadars are equipped with a closure so that they can be placed and fixed perfectly next to each other.

Nadar fences, also known as crowd barriers, barrier fences or barriers are widely used at public events. You can see them everywhere on cycling races to keep the fans at a safe distance from the cycling peloton. But they are also used at other sports venues, music festivals, parades and various gatherings. The nadars are hooked together next to each other to form an impenetrable wall. Nadar fences are usually produced in metal. But there are also variants in plastic.

The name nadar has its origin in the 19th century. The French balloonist Gaspard-Félix Tournachon took off in Brussels on 26/9/1864. In order to keep the crowded spectators at a safe distance, the mayor of Brussels had the streets cordoned off with crowd barriers. Tournachon was the first to take aerial photographs of these fences.

The pseudonym of Tournachon was "Nadar". That's how the fence got the name of the balloonist. Nadar was a very busy man. Besides being a balloonist he was also a draughtsman, writer, journalist and photographer.