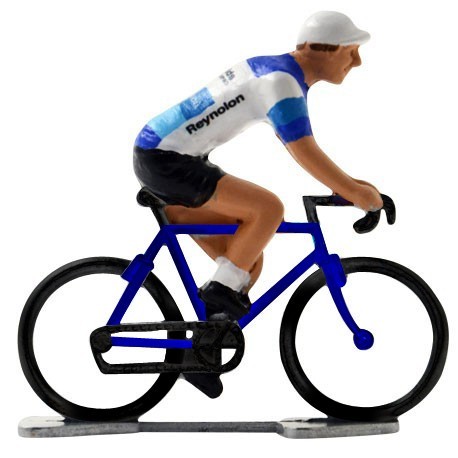 Reynolds was a Spanish team that was founded in 1980, sponsored by the aluminum company Reynolds. From 1989, the Spanish bank Banesto became co-sponsor. In 1990, Banesto became the main sponsor and the sponsor Reynolds withdrew from the team.
After the sponsorship of Banesto, the French bank Caisse d'Epargne and the Spanish telephone company Movistar also became the new sponsors on the jerseys.

The Reynolds team was founded in 1980. The team was created thanks to the sponsorship of the company INASA (Industria Navarra del Aluminio, S.A.), which has sponsored a youth team since 1974 and an amateur team since 1977. The team's leader was Spanish Pedro Delgado, thanks to whom the biggest successes were achieved. Delgado won the Tour de France in 1988. Pedro Delgado was also on the podium in the Tour in 1987 (second) and 1989 (third). Angel Arroyo also took the podium in the Tour de France in 1983 with a second place in the general classification. Delgado won the Vuelta in 1985 and 1989, and finished third in 1992 and 1994.

Pedro Delgado
Pedro Delgado was a professional cyclist from 1982 to 1994. He was a typical stage tour cyclist. Good at climbing and time trials. Thanks to these qualities he won the Vuelta twice and the Tour de France once.

1985: Vuelta
Delgado won his first Grand Tour in 1985 with the Vuelta a España. At the start of the penultimate stage Delgado was six minutes behind the Scottish climber Robert Millar. Delgado attacked together with José Recio. Peugeot, the team of Millar hesitated in the pursuit. And finally Recio won the stage, and Delgado took over the leader's jersey.

1988: Tour de France
Delgado won the Tour de France with a 7:13 minute lead over Steven Rooks. This Tour victory was based in his win in the 12th stage to Alpe d'Huez, and also by winning an individual time trial. He was the first Spanish winner since Luis Ocaña in 1973. However he was tested positive on Probenecid, a drug capable of disguising doping with anabolic steroids. As the drug was not yet on the UCI's doping list at that time, there was no sanction.

1989: Vuelta
Delgado lost a new Tour victory in 1989 after being more than two and a half minutes late at the start of the prologue in Luxembourg. He would finish third in the general classification with a gap of 3:34 minutes with Greg LeMond. In the Tour of Spain in 1989 he achieved his second final victory. It was an exciting battle between the Reynolds team of Delgado and the Kelme team of Fabio Parra. On the penultimate day, in a very tough stage across five mountain passes, Delgado was quickly isolated after attacks by the Colombian mountain specialists of Kelme. But Delgado managed to keep the gap with Parra not too big with the help of several riders from other teams. Among the riders who supported Delgado was the Russian Ivan Ivanov, who received from Delgado a white envelope in public before the start of the last stage. Delgado explained that it was his address so that Ivanov could come and visit him with his family. Parra finished second in the general classification after Delgado.

1994: End of his career
After the end of the 1994 season, Delgado ended his career as a pro cyclist. In his career he finished eighteen times in the top ten of the general classification of a major tour. He won four stages in the Tour de France and five stages in the Vuelta a España.