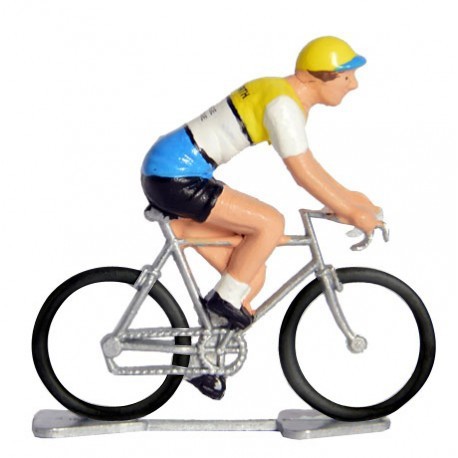 Pelforth-Sauvage-Lejeune was a cycling team in the 60s.
It rode with a French licence from 1960 to 1968. The most famous rider was undoubtedly the Dutchman Jan Janssen. Janssen won the Tour de France in 1968.

Jan Janssen was a professional cyclist from 1962 to 1972. With his blond hair and glasses he was a striking figure in the peloton. His biggest successes were winning the World Road Championships, winning the Tour de France and the Tour of Spain. This made him the first Dutchman to win the Tour or the Vuelta. In the Tour he won a total of 7 stages, and he had the yellow jersey for 2 days.

Janssen has been riding for French teams in his career. The longest period he cycled at Pelforth-Sauvage Lejeune. Pelforth is a French beer brand based in Lille. It is now part of the Heineken group. Lejeune, also known as Sauvage Lejeune or Cycles Lejeune, was a French manufacturer of racing bikes.

Janssen was a very good sprinter, but soon he evolved into a rider for the stage races. In 1964 he won his first stage race, Paris-Nice. He also won two stages and the green jersey in the Tour de France. He became world champion later that year in Sallanches (France). In 1965 he became the sprint king again and won the green jersey. In 1966 he was very close to winning the general classification for the yellow jersey.

He would have to wait until 1968 to win the Tour de France. He beat the Belgian Herman Van Springel by barely 38 seconds. Janssen hadn't worn the yellow jersey before the podium in Paris. The last stage was an individual time trial in which he jumped over Van Springel in the GC and won the Tour himself. That mere 38 seconds was the smallest margin for a long time until Greg LeMond won the Tour of Laurent Fignon in 1989 with only 8 seconds. In 1968 the Tour was organised for national teams and not for factory teams. Because of this Janssen didn't ride in the blue, yellow and white of Pelforth-Sauvage Lejeune, but in the Dutch orange jersey. It was tour manager Felix Lévitan who made the decision to start with country teams. This was a reaction against the sponsors who had organised strikes against doping tests the year before. After his career Jan Janssen ran a small company that makes bicycle frames.

His most important victories: