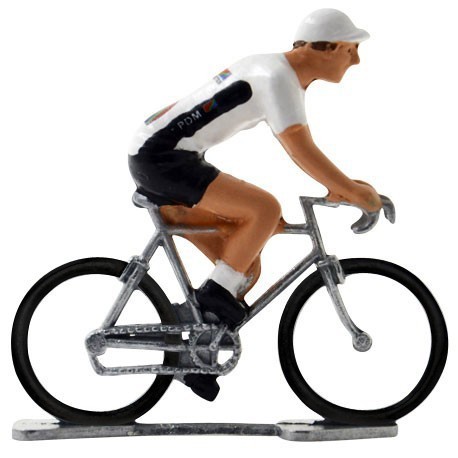 PDM was a Dutch cycling team from 1986 until the end of 1992. The team was sponsored by Philips Dupont Magnetics, a joint venture between the electronics company Philips and the chemical company DuPont. The PDM video cassettes were advertised on the jerseys. The team rode with Italian Concorde bikes. Roy Schuiten was team manager and Jan Gisbers was sports director in 1986. The following year, Gisbers took over as team manager and was in charge until 1992. He was accompanied by Piet van der Kruijs and Ferdi van den Haute.

The team was successful in the classics and finished second in the general classification of the Tour de France in 1987 with Pedro Delgado and 1988 with Steven Rooks. Erik Breukink was also on the podium with a third place in 1990. The team won the Tour team classification in 1988 and 1989.

Gert-Jan Theunisse
Dutchman Gert-Jan Theunisse won the mountain classification in the Tour de France in 1989. Theunisse started his professional career in 1984 at Panasonic. In the Tour de France of 1988 he challenged his former teammate Pedro Delgado. However, he tested positive for testosterone and was fined 10 minutes, which brought him down from fourth to eleventh place in the general classification. Theunisse returned in 1989 and won the mountain classification and the stage to Alpe d'Huez. In 1990 he tested positive again in the the Walloon Arrow. In 1995 he stopped his career because of heart problems. After his career he became supervisor and also team manager of mountainbiker Bart Brentjens. Brentjens won the Dutch national championship, the world championship, the World Cup, the Tour de France VTT and also gold at the Olympic Games.

Steven Rooks
The Dutchman Steven Rooks was known for his climbing skills. He was a pro from 1982 to 1995. In the Tour de France of 1988 Rooks finished second and won a stage with arrival at L'Alpe d'Huez. He won the polka dot jersey for the mountain classification and also the combination classification. In the Tour of 1989 Rooks won the 15th stage, a 39 km long mountain time trial to Orcières-Merlette; that year he finished seventh and again he won the combination classification. Other victories are Liege-Bastogne-Liege in 1983, the Amstel Gold Race in 1986 and the 1991 and 1994 national championships.

Rudy Dhaenens
The quiet Belgian Rudy Dhaenens is best known for winning the 1990 World Championship in Utsunomiya, Japan. Dhaenens excelled several times in classics such as Paris-Roubaix, and achieved many places of honour. But there were no big victories. He was often confronted with bad luck. A flat tire in the finals or a crash. But that day in 1990 in the World Championship everything went perfect. Dhaenens escaped from the peloton together with his compatriot Dirk Dewolf and the 2 sprinted for the victory. He won the race and was allowed to wear the rainbow jersey for one year. In 1992 Dhaenens had to stop his career because of heart problems. He died in 1998, at the age of 36, after a car accident.