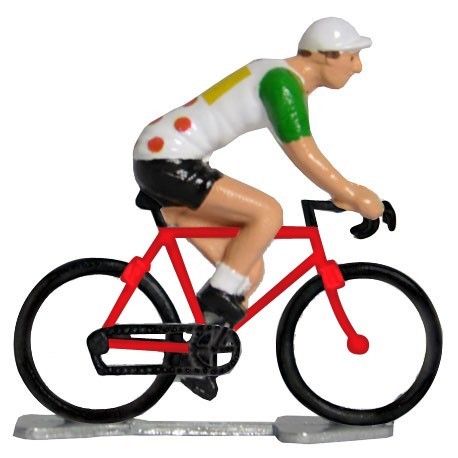 In 1985 the combination classification was reintroduced, and this time the winner wore the jersey with the different patches. The Dutchman Steven Rooks was the last wearer of the jersey in 1989. There were only 3 riders who ever won this jersey.

The opinions about the jersey are positive and negative. Many people found the jersey very ugly, a monstrosity that had all kinds of things. Others thought the patch sweater was a very colorful and a nice award for the best allround rider.

Such a classification still exists in the Giro and the Vuelta today.

In the years before his first Tour victory, he has been on the podium twice in Paris, 2nd and 3rd. In 1985 he rode for the same team as Bernard Hinault. Because of the team tactics he couldn't go all the way. But in 1986 he won the yellow jersey and the general classification. Just when his career was at its peak, he got injured. A few months later he was mortally wounded in a hunting accident. The 2 years that followed he could barely race. Many thought his carreer was over.

But in 1989 he returned to the start of the Tour. He won the individual time trial in the first week and made a big impression. It would be one of the most exciting tours ever. In the following stages Lemond and the Frenchman Laurent Fignon had the the yellow jersey. It was very close. One day Lemond had the jersey. The next day it was Fignon. Laurent Fignon seemed to be the best because he was very strong in the mountains. With only one stage to go, he was 50 seconds ahead of the American. This final time trial was about 24.5 km long.

He won stages in the Tour de France, and also in the Giro. In 1985 he was third on the podium of the Tour of Italy. After his third Tour victory in 1990, no major successes followed for the American. In 1994 he stopped as a professional rider.

After his career he was active as an entrepreneur and producer of racing and spinning bikes. He also owns a restaurant and regularly appears in the media as a cycling commentator. He has also always been a major prosecutor of doping in the peloton. He accused Lance Armstrong and Floyd Landis of doping. It was proved that Lemond was right.